Cafe Moto Go!
It is safe to say that we’ve spent a lot of time carefully crafting our coolest and fastest e-bike yet. And the day has come where we finally get to share it with you. Introducing the Limited Edition Café Moto Go!

This pedal-assist e-bike is the ultimate combination of badass, retro style and modern technology. Inspired by Café Racer motorcycles of the 1960’s, this highly stylized ride is powered by a Bosch Performance Speed motor and can reach up to 28 mph.

We’ve spared no detail with this bad boy, so we caught up with our industrial designer, Jeremy Westerlund, to get a more in-depth look behind the creation of the Café Moto Go!

What was the initial draw to the 1960’s Café Racer motorcycles as the inspiration for the Café Moto Go!?

They were just cool. Period. Back then, people were tearing apart their motorcycles, removing parts that weren’t absolutely necessary and modifying them to be lighter and faster, making them their own. Making them stand out from the mundane. They didn’t want to be on just another motorcycle. They wanted to be on something that spoke to them, so they created bikes that expressed who they were and their lifestyle.

What details of motorcycles translated into the design of the Café Moto Go! and what was that process like?

We wanted it to be something that visually had a motorcycle “feel” without being too literal like faux engine parts or anything like that. The proportions of the frame were really important. The riding position needed to be low and sporty like a Café Racer because they didn’t build those things for comfort. They were built to go fast, corner well and look cool. So, the Café Moto Go! needed to have that aggressive, sporty look and feel. The bullet headlight gives it a more “moto” look while the tank shape on the frame was a key element. It has a pretty substantial width and feel to it, not to mention angled color blocking to evoke the feeling of speed. While riding, it feels a little bit like you’re on a motorcycle. Just wait until you feel the Bosch motor kick in… it feels even more like a motorcycle.

What sets this e-bike apart from others?

There are a lot of options for e-bikes right now and more are coming out every day. What sets the Café Moto Go! apart from the rest is that it’s not a thrown together accumulation of parts put on a generic frame. The selection of every component on this bike was thought out by the Electra team. From the Brooks saddle and grips to the Gates belt drive and Enviolo hub, Crank Brothers pedals and Bosch Performance Speed drive system with in-tube 500wh battery. This is all really high-end stuff. Put all of that on a beautiful frame (ok I designed it, so I’m biased) and you have one badass, well-equipped bike! And, you won’t look like everyone else.

What keeps you inspired to make cooler, better and more creative bikes?

Personally, I’m a tinkerer and love to build things. I like working on cars and putting motors and transmissions in them that they didn’t originally come with. Hot rods, motorcycles, trucks, 4×4’s, fast cars, slow cars… pretty much anything with a motor that moves. I love it. In addition to that, architecture, furniture, nature and photography fascinate me. I’m kind of all over the place really, so I never know where inspiration is going to come from. At the end of the day, my inspiration is an accumulation of all those things. And most of all, I’d say I’m inspired by the idea of creating something that puts a smile on someone’s face and makes them feel happy.

About the Author: Electra Bicycle Company

At Electra, we make bikes to ride. Not like 45 miles in tight shorts and clicky shoes ride. Just ride. Everyone has a place to go. And it’s way more fun on an Electra. Wherever. Whenever. Whoever you are. Ours is not an exclusive club. If you like to have a good time, you’re in. 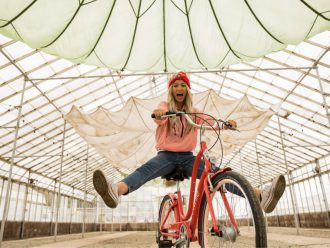 Summer Shades for the Townie 7D